“Freedom is worth the price”, Boris Johnson said today as the war in Ukraine drives up prices in Britain.

As fuel and food costs have risen due to instability and sanctions on Russia, the PM appealed to the British public to be patient despite the pain in their pockets.

hero President Zelensky The G7 meeting in Bavaria begged for more heavy weapons and air support in a video appearance at the meeting of world leaders today.

And the PM said he can “really see no alternative” to helping Ukrainians regain their land in the face of Putin’s terror.

But he acknowledged that the price is being paid at home because resisting “tyranny and aggression” is “too expensive”.

Although he insisted that “the economic impact on the UK will start to subside, we will find a way around things and some of the cost pressures will start to ease.” 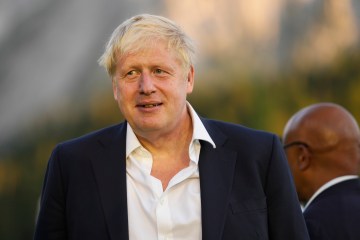 Mr Johnson warned to back down for help Ukraine The season will be open to tyrants around the world and added that as the West sticks to its course, “strategic endurance is very important.”

He told the BBC: “In terms of staying on course, imagine if we allow Putin to get away with another country’s violent takeover of vast swathes of sovereign independent territory. The lessons for him will be absolutely chilling.”

Rejecting calls by the people of Ukraine to leave the ground to end the war, Mr Johnson insisted: “There is no deal that President Zelensky can do.

“So in those circumstances G7Supporters of Ukraine around the world must continue to help Ukrainians to rebuild their economy, to extract their grain, and of course we must help them to protect themselves.”

Coming under questions once again over his leadership, the PM told his Tory foes to stay home because “criticism is important” and that he was “listening all the time.”

He told reporters: “People like Vladimir Putin are not blessed to be told where they have gone wrong. Look at it this way.”

Meanwhile Mr Johnson also indicated that another cut in fuel tariffs was coming – as the cost of living crisis engulfs his government.

Refuting claims of his government not listening to voters’ concerns, the PM said: “I think people like me need to learn from what is happening, inflationary pressures.

“Number one: We need to help people through the current pressures.

According to data firm Experian, the average price of a liter of petrol in Britain’s forecourt reached a new high of 191.1p on Sunday.

The average price of diesel was 198.9p per litre.